The torture of Tantalus 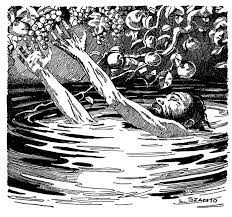 The torture of Tantalus

Do you know the story of the torture of Tantalus? Well, if you don’t know it, I’ll tell you briefly now, but even if you don’t know it, you can be sure that more than once in sight you too have been “Tantalus”. But let’s go in order and I will explain why today I want to talk to you about this ancient story. Let’s start by saying that Tantalus, in Greek mythology, was not just anyone, he was the son of Zeus, the king of the gods. However, and it could not be otherwise given that Greece was the cradle of democracy, this did not guarantee him a life of ease and privilege as perhaps he would if he lived today. Yes, because in Greek mythology even the son of the “boss” could have a bad end. And so it also happened to poor Tantalus. He was in fact brutally punished by the same gods to whose circle he somehow belonged. There are those who say that the punishment was due to the fact of having tasted amber (food reserved only for divinities), while there are those who claim that he was punished for having given human flesh to the gods. The fact is that one day “the inhabitants of Olympus” decide to punish poor Tantalus for eternity. And how do they do it? They tie it to a fruit tree overlooking a wonderful freshwater stream, and from that moment the unfortunate hero, every time, taken by the pangs of hunger and thirst, will try to get close to the fruit of the tree or to the water , will see them go away. And all this forever …

I imagine that the story of Tantalus, reading it, did not put you in a good mood. I expected. And there is a precise reason why I am telling you today. And do you know what it is? Well today I feel very Tantalum too. At 60, after a life of work and, I won’t hide from you, great satisfactions, I had come to the point of thinking that in fact I could have obtained everything I wanted from this existence. But evidently this was not the case. Yes, because life, no matter how good, rich and beautiful you may be, loves to play weird tricks on you. Sometimes it makes you taste happiness, the real one, intangible and not buyable so to speak, and immediately after you have tasted it (a bit like the amber of Tantalus) it takes it away from you or, even worse, keeps it two passes by you, he shows her to you, but prevents you from reaching her, from reuniting with her.
I think it is an experience that happens to everyone in life, and my fate gave me the gift (which I would have gladly done without) of living the torture of Tantalus at 60.

Just a meter away

You are there that you look at your happiness just a meter away from you. You spend night and day fantasizing about how happy you could be if you could just make it yours again, but life, like invisible (but armored) glass gets in the way. There are those who find this happiness, for what little it shows, in work or in personal satisfaction. Someone else in relationships. Today I know that it exists, I have tried it, I can testify to the whole world that there really is, the gods or whoever for them, have created this universe in such a way that each of us, after a more or less long wandering, he can find his goal of happiness. But the hard part is staying close to it. You knew how difficult it is. Sometimes it’s us who make things difficult, sometimes it’s the people around us who do it, sometimes it’s just bad luck. The fact is that staying attached to this longed-for happiness is fucking complicated. As a photographer I recognized and focused on her, allow me the pun, but unfortunately it wasn’t enough to keep her with me.

And how Tantalus seems to me to spend my days taken by the pangs of hunger and thirst while I continue to see her a few steps away from me, close but so apparently unapproachable. But is it really so? are we really forced to accept all this? I have been wondering for at least two years, sometimes I think I have found the answer, but then everything gets mixed up and the doubt returns, the uncertainty returns.
One thing, however, as I said, is certain, I have felt that happiness and, at least for this, I will be eternally grateful to life because, rest assured, at least half of us are not lucky enough to try it even once, who for bad luck who out of cowardice (because you know, it also takes a lot of courage to go towards happiness).

I had the luck and courage to make it mine, as far as I could. And I would still have it to be able to re-embrace that longed-for happiness. My source of happiness. And, unlike Tantalus, I like to think that I am not the victim of a torture, of an eternal punishment. I like to think that sometimes the unapproachable, the unreachable, can get closer or closer to me simply with a little wind in favor. The same one that, in the opposite direction, took it away from me … happiness.
And if the wind doesn’t change, well, I’ll just have to try to look for it again, elsewhere, in other places, in other eyes. I, we, unlike Tantalus, and thank goodness, fortunately we are not tied to a tree. However, we are tied to memories and this sometimes makes it more difficult to try to seek happiness elsewhere. But it is a task to which we are all called on this Earth, no one excluded.
And I am convinced that if it happened to me once to meet it, to experience it, then it means that it is there, that it exists. And if so, I don’t see why he shouldn’t be able to meet her again, relive her. On the other hand, I am waiting for her but I also know she is waiting for me. It’s my stuff.