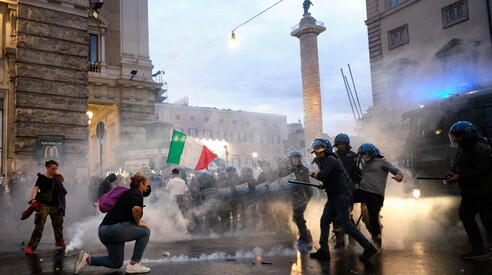 Photo of the month – October 2021. When I found myself thinking about what could be the best photo of the month for October 2021 I didn’t have the slightest doubt not so much about the individual photos to choose, as there are thousands on the net, but about the portrait topic: the protests of the no vax and no green passes.

Now, I have a firm idea on both issues. Vaccines and green passes. But this is not what I want to talk about also because, unlike many commentators of the web and social networks, I do not think that the rest of the world will be interested in my opinion on the subject on which, I believe, the only plausible approach. is to listen to all the voices and then decide individually and personally in science and conscience.

Having said that, there is certainly an important sociological aspect behind these protests. Attention! I am not referring to the fomented, the delinquents, the professional wreckers, who every time tend to crash into the protests that from time to time are in trend, only to promote their extremism or even worse for political convenience.

The aspect that interests me is the one that pushes the “normal” person, that is the classic family man, to be clear the one with a normal life, a normal job and an average culture and take to the streets and protest against measures that, at least nominally they seem to be accepted by the vast majority of the population.

A majority that, I am sorry to say, unfortunately has a single approach towards the aforementioned father of the family, that of derision and condemnation. The problem is that we’re missing out on something we can’t or don’t want to understand.

In fact, what I ask myself, and I ask you is, why even people with a medium-high education, who are trained and informed about what is happening in the world (i.e. those people theoretically able to decide according to common sense) decide not to get vaccinated or to protest against measures limiting individual freedoms such as the green pass?

I have questioned myself for a long time and I believe that the answer to this question is to be found in the lack of authority of the regulatory sources (government, doctors, regions, etc).

Let me explain: it is clear that we are facing a crisis of values ​​and the value of large institutions. Today, unlike for example 30 years ago, if you ask the average Italian “who do you believe?”, He will easily answer “nobody”.

It used to be different …

30 years ago it would have been different I assure you. 30 years ago there were certainties that have collapsed in the meantime. There were those who had their own iron political faith, right, center or left, which revealed itself not only in voting but also in their way of life. There was the Church which at that time enjoyed the great trust of a large slice of Italians. And then ultimately there were the families.

Today all these certainties have collapsed. There are those who say it is the fault of globalization. On the other hand, I think they collapsed following a greater awareness of modern man with respect to the various facets of today’s reality (which he did not perceive before).

Faced with this collapse, everyone feels entitled to question even the aspects that in theory should appear more obvious, such as the invitation to get vaccinated. An invitation, and I agree with this, which is declined by those who rightly ask themselves questions that cannot be answered, if not very confused, by the institutions.

Trust is good but …

Today, in practice, governments are asking their citizens to take emergency drugs and give up pieces of freedom by saying “trust us”. But, dear gentlemen, I wonder and I ask you: how can the average Italian trust governments that have always stood out for their ineffectiveness, unpreparedness, if not precisely for levels of corruption that are unparalleled in Europe?