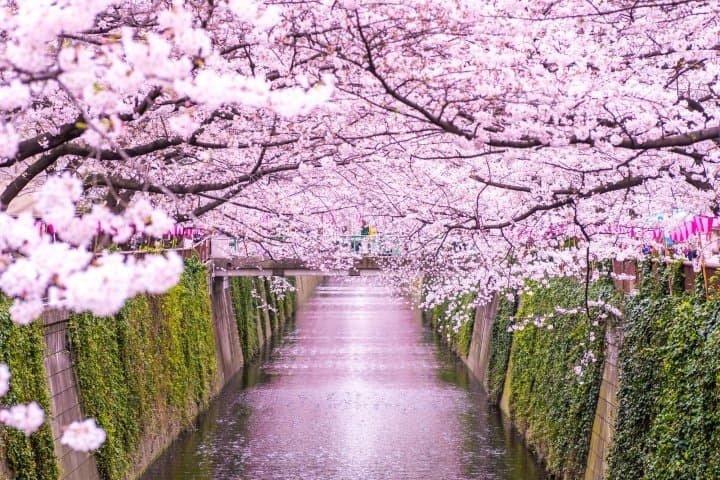 During the month of April, on this blog, I had chosen to dedicate my “column” photo of the month to the Holy Fest in India, a choice dictated by my precise desire to deliberately divert attention from the world focus of the moment, the war in Ukraine, to try to ford, through images, those small signs of restart and rebirth that come from these festivals dedicated to the impending spring season. A seasonal rebirth that also becomes an opportunity for rebirth at the level of society as a whole, but first of all, and I won’t hide it from you personally, starting with myself.

For the same reason I decided to dedicate the photos of the month of May which, as always, I remind you, actually refer to the previous month of April, to another great symbol of rebirth, the one represented by cherry blossoms in Japan, and there are several reasons that led me to this choice.

Despite being on average on the same Italian latitudes, Japan is a country with a much more severe winter than the Italian one. So these cherry blossoms, which have now become a symbol of the nation, take on a strong meaningful sense as they show us how nature, from which we would have so much to learn, manages to rise again even from the harshest winters, stronger and more beautiful than first. And we should learn to do the same. But there is more. In my opinion, the choice of Japan is even more significant in the current geopolitical context. At a time when the atomic threat has become more current than ever, Japan is (unfortunately and fortunately) the only country in the world capable of witnessing the scars that nuclear war leaves on the ground, in terms of death and destruction for years and years to follow.

Hiroshima and Nagasaki still remind us of everything that man should never do towards his fellow man, regardless of the reasons that may push him. But they are also the symbol of how you can start again even when you hit the bottom that you can’t. This is one of the reasons why all of Japan fascinates me in general. Think about it well. Post-war Japan was a heap of radioactive debris outside all international circuits. Yet the great and proverbial patience of the Japanese has led this country to rise again, to weave the right alliances on a global level to become an economic superpower, completely abdicating any kind of supremacy in the field of war.

The cherry blossoms of Japan are therefore a sign of hope for everyone, and for me in the first place. A signal that pushes me to shake off the signs that this bad winter has left us, launching confidently towards the best days that await us with this sweet ending of spring and this beginning of summer. Cherry blossoms are an explosion of light colors, definitely the ones for the better able to evoke the rebirth, lightness, joy we all need at this moment.

The gloom of winter has left in many of us, in too many of us, the emptiness of those who think that everything is over here or everything is about to end. Yet, once again, nature, pictured here in the extraordinary Japanese meadows, tells us a different story, a story in which each of us is given a new chance. Each in his own way and according to his own story.

There are those who come out injured this winter due to fears related to Covid and the war. There are those who are injured for more “down to earth” reasons but as true as the loss of a job. And there are those who are injured, perhaps for personal reasons, because they have been injured, disappointed or worse still abandoned. Everyone in the seclusion of their own soul can rightly have their holy reasons for ending the past winter with more or less deep scars. But the cherry trees of Japan tell us, however, that regardless of the depth of these wounds, around the corner, there is a horizon of new sun for everyone. A new sun that however requires new eyes to be seen by those who come out of a profoundly dark moment. We will not see it, or at least not entirely, if we persist out of fear or habit, to look at the world with the usual lenses.

There is so much light outside that door, it is enough to have the courage to open it, leaving behind what it was, and letting ourselves be pampered by the spectacle that, once again, nature has prepared for us, in that great party of collective rebirth that it’s called spring.